Attached is an AEBF Media Release on recent WEPF updates 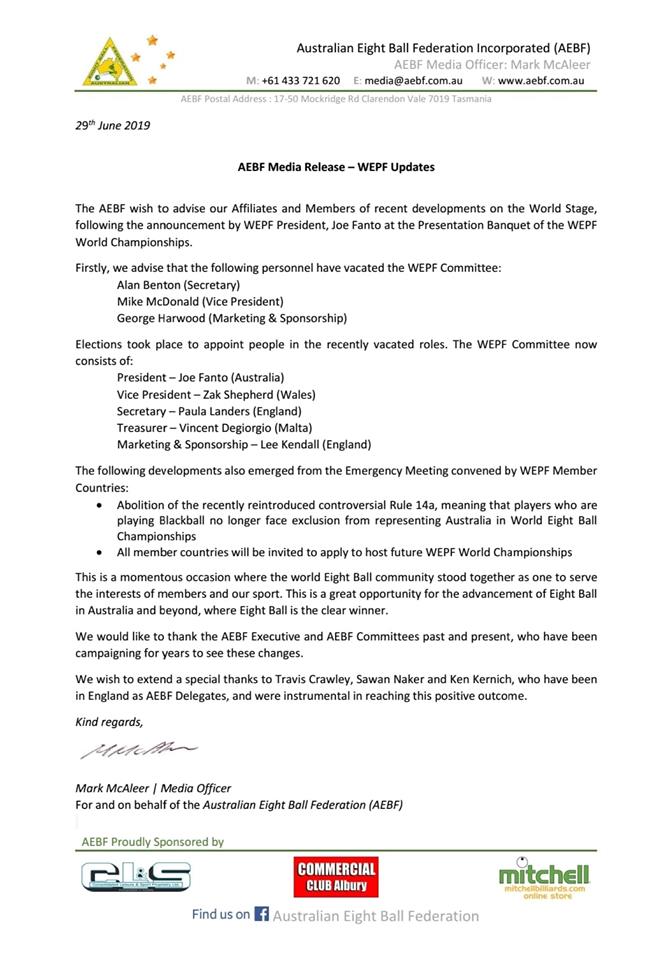 Congratulations to the 2019 Australian Men’s Team on finishing strong in the round robin stage of the World Championships, making it comfortably inside the top 6 to earn a spot in the playoffs.

Unfortunately the dream came to an end after a narrow defeat to Ireland.

You can all hold your heads high after a solid performance all week to make it into the playoffs. We are all proud of you back here in Australia. 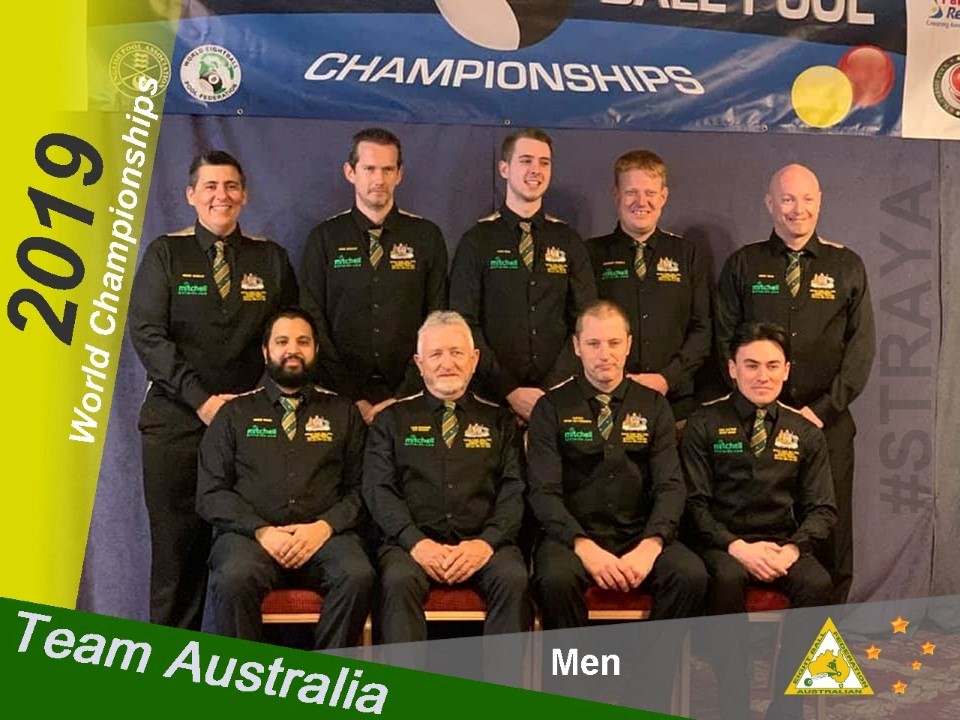 The 2019 Australian Ladies team have put in a stellar performance at the World Championships, having only lost one match during the round robin stages.

This has earned the girls a well-deserved spot at the top of the table, and a spot in the semi-final against Ireland.

You can all come home knowing you have done Australia proud!

A big shout out to Holly Va’aelua who made it to the Semi Final of the Ladies Masters event too! What a huge achievement! 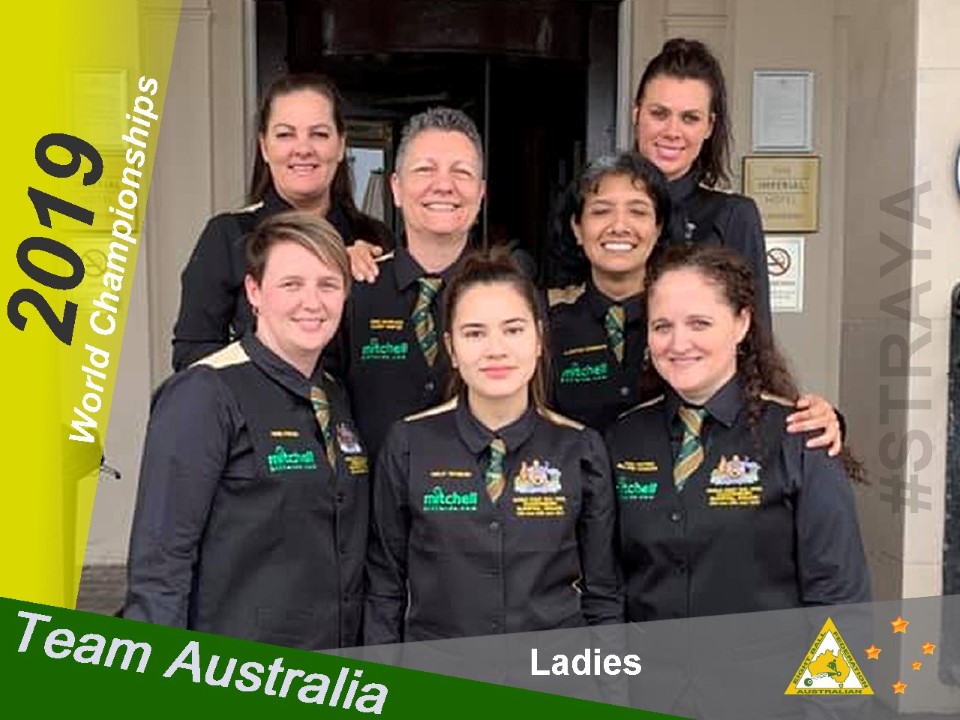 The 2019 Australian Juniors Team stole the show at the World Championships, having went undefeated in the round robin stages!

The lads went on to win a nail biting semi-final over South Africa, lost out to the hosts in the final.

You were phenomenal all week, and have done Australia so proud!

With such a display of talent by the Australian Juniors, the future of Eight Ball has never looked so bright in Australia! 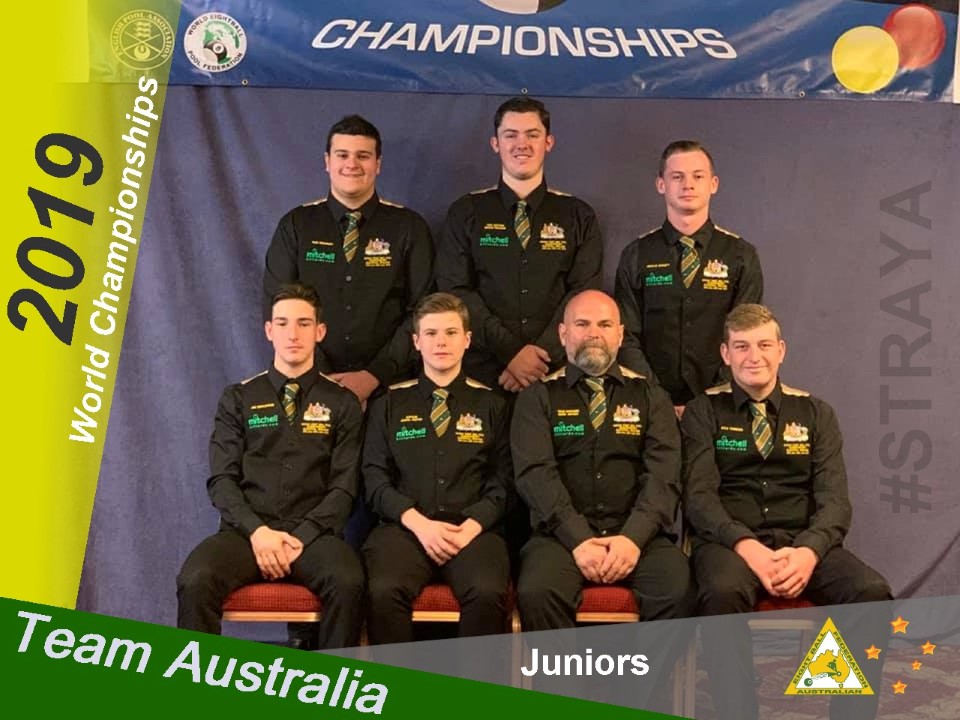 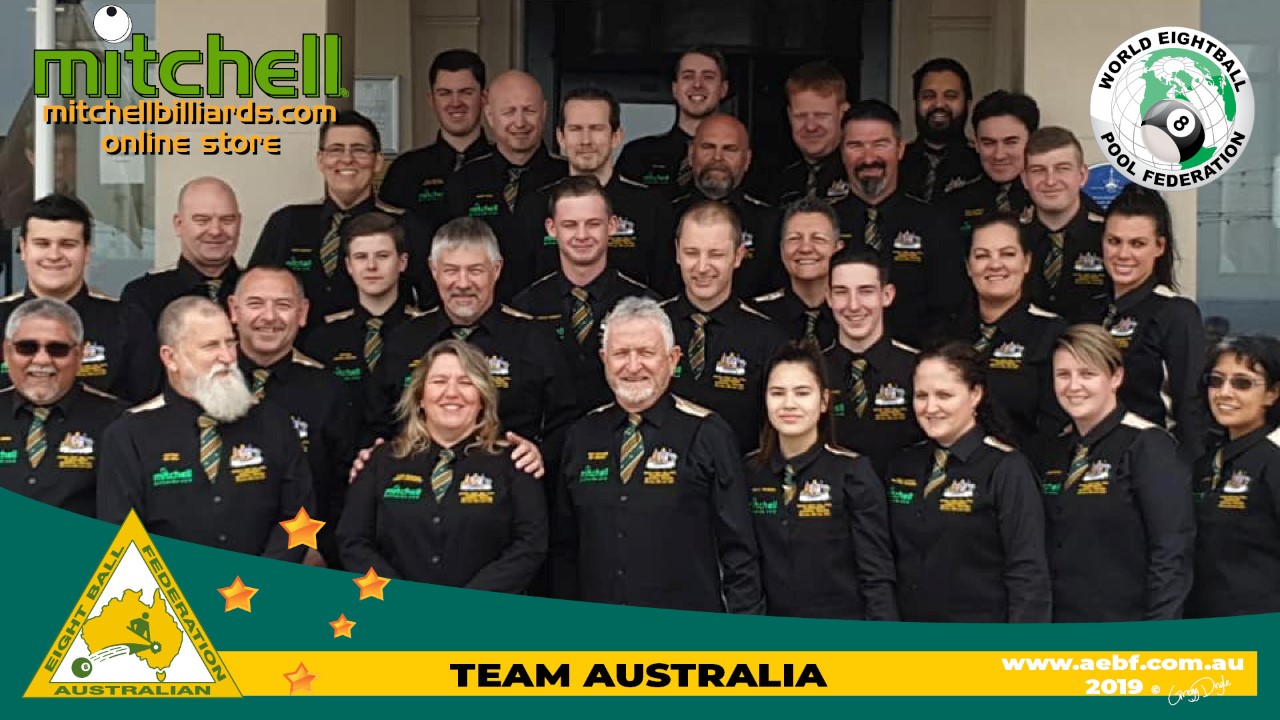 WEPF are changing the format for next year (2018) in order to streamline the Worlds, this was agreed by the nations at this years event, and will be confirmed in writing from Alan as stated above.

6.       Most of the other events will start on Sunday 24th and Finals day on Friday 29th for all sections. Juniors/Wheelchair will start 25th or 26th

7.       The presentation of all trophies will be at the Banquet on Friday 29th. We had this format at this years Europeans with over 400 in attendance, a great presentation.

All of the above is subject to number of entries from the member countries but we would not expect the schedule to change much.

One of the big benefits to the above format is that the Mens World and Masters events will be held first, starting on the Weds.

All other sections will not be involved until the Saturday or later which reduces substantially the number of days people have to be in attendance.

With Australia mens plus others in mind we have moved one of our UK tours to be held in Birmingham from Friday 15th until Sunday 17th.

The venue is 5 minutes from Birmingham International airport and the hotel is the Hilton Metropole, possibly the best hotel in England outside of London.

We will be using the World Championship tables at the Tour event, which will then be transported to Blackpool for the Worlds.

Accommodation cost will be in line with what you are paying at the Imperial. The UK tour events which your men can enter are main event £10,000 prize fund and Challenge £5,000.

Entry fee is £100 which covers both events.

For a small cost of £10, depending on numbers we will arrange a coach to Blackpool late Sunday.

If the rest of your party travel later than the mens we will arrange to pick them up at Manchester airport as in previous years.

Your players are invited to attend the UK Tour in Birmingham, this is mainly for the Mens squad but if any of your juniors, U/23, Seniors also wanted to attend they would be most welcome.

The main benefit for your players is that they will compete in major prize fund events on the world championship tables just before the worlds start.

We only have a limited number of spots available but are giving Australia first option. Would appreciate your comments as soon as possible.

The world championships are being held in Blackpool, England, between the 20th and 30th June 2018. Australia will be represented with five teams in the Men’s, Women’s, Under 18’s, Under 23’s and Over 50’s categories.

Confirmed traveling players are as follows: